This past weekend I was lucky enough to have a painting hanging At Punkrockfish Gallery in Ocean City MD. A good friend (and a hell of a good tattooer at Black Cobra in MD) Little Chico invited me to be a part of his show titled 8x10. 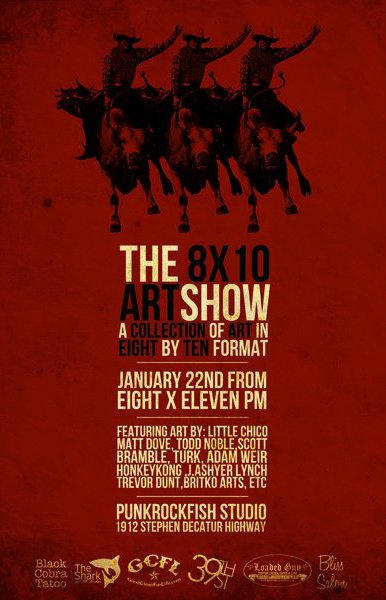 As you may be able to guess the only real requirement for the work, is that it fit into the 8" x 10" size requirement. There is a newspaper article about the show and about Chico here... Having the freedom of subject matter allowed me to put the time into an idea i had been kicking around for a bit. I have been on a bit of an American Civil War kick lately and wanted to do a piece about the great Thomas J. "Stonewall" Jackson. I had recently finished reading/listening to a brilliantly written bio about him called "Standing Like a Stone Wall" by James Robertson. In the book Mr. Robertson gets fairly descriptive in Stonewall's personality and history. Jackson was an eccentric to say the least.

To do a painting of him, it was impossible to simply choose one or two key elements of his life to focus on. Instead I tried to focus on various stages of his life, and tried to use imagery to point out some of the occurrences and traits that i thought defined him as a man and as a General. With his unwavering faith in God's will to his brilliance and bravery on the battlefield, it is easy to miss the more bizarre and quirky parts of what made him the man he was. For instance: He would hold his hand up, palm facing forward, at random points during the day weather he was in the middle of a battle or not. He would do so either in prayer (as he was commonly heard mumbling to himself), or because he insisted that one of his arms was actually heaver than the other and he wanted to get the blood to flow out of the raised arm to balance himself out. I could go on and on but have not the time to explain it all. A few folks have specifically questioned why in the painting he has a Northern Pike draped across his lap. The short version of that image is: As a child Thomas was paid .50 by a local townsman for each pike he caught that was 12" or larger. One day he caught one that was at least 36" and as he carried the massive fish through town, another shopkeeper offered Thomas $1 for the fish. When Thomas declined the man offered $1.25. Thomas declined again explaining the fish was owed to the other fellow at the agreed price of .50 and if he himself wanted a taste of that fish, it could be had through the other gentleman. When Thomas got to his destination he was offered an extra .50 because the fish was so big. Thomas said the original agreed price was all he would accept. He was sure the man had paid full price for a few fish that fell short of the 12" mark, and he was grateful for that kindness.

Anyhow, I can nerd out all night but i doubt most of you care enough for me to bother. If you are truly interested drop me a line and i will explain further what all of the silliness in the painting represents. As for the painting itself, it is mostly done as an ink wash painting on stained hot press watercolor paper. the highlights and limited color were added at the end with colored pencil. It is an approach to painting I've been working out for a bit now and I'm slowly getting more and more comfortable with it.

Here is the finished piece. Click on it to see it larger. It is set at 72 dpi so it can be viewed reasonably clear, but i am making prints available, so if  you really want to see the detail you could always contact me and ill happily trade you $40 for a limited Giclee. haha sorry for the shameless promotion but i gotta pay for more firewood.
If you got this far, thanks for caring enough!!
Scott 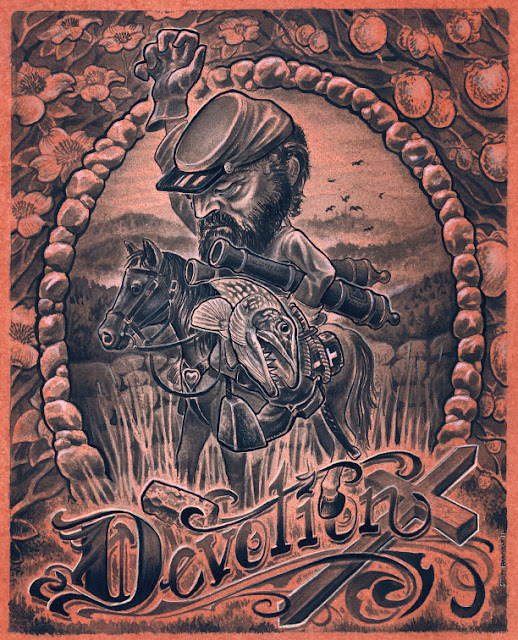 Posted by Scott Bramble at 4:22 PM