3 swordsmiths and a soldier

This is a pair of tattoos started in the past week. Both will end up full color, and both have a long way to go. I have been really excited with the tattoos I have had the opportunity to work on lately.

For each of the two tattoos I ended up taking few perspectives. They both wrap around an arm, so single photos don't really do them justice.

I hope y'all are doing well.
-Scott

First is a revolutionary soldier. This is the first section of what will be a 3/4 sleeve. This fellow is representing the idea that he would rather cut off his own arm, than live under tyranny. There was a flag from the texas revolution against mexico that showed a bloody arm holding a saber. We applied that same theme to an American Revolutionary War soldier. The rest will be a composition patriotic and cultural iconography. I'm so excited to do this it's silly.

And...
This one is the start of another sleeve where there is a samurai master swordsmith and his two aids hammering out a sword. It was fun trying to find the type of hammers and garb to be accurate for the characters. There will be an image of a spirit behind them granting the gift of their ability. I love my job.

Posted by Scott Bramble at 9:53 PM No comments:

So I finally got this painting done, and shipped of to Safwan in Montreal. I had a bit of a hold up so I could get prints made and wanted to be sure they came out well before shipping off the original artwork. I had posted some of these shots and mentioned this painting in previous posts, but I will post them again for the context of this posting.

The painting itself is called “Chicamauga”. It is based on the short story of the same name by Ambrose Bierce. (Here is a link to the complete story) He had written a couple dozen short stories based loosely and directly on events of the civil war. I plan to do at least two more paintings from his stories as soon as I can get a better grip on my time. All of his stories are graphic and usually full of very dark irony. Perfectly suited to base some illustrations on.

There are a few things I will be working on for shows in the near future, so this series may have to be shelved until I can get the time to focus on it. It’s a little disappointing, as I don’t usually have the fire under my ass as hot as it has been working on this. That said, it is hard to complain about having a few shows and an entry into a book to work some paintings up for. I’ll of course write more on those projects, as they get finished.

The last few images are some vinyl stickers that I’m printing for the Lehigh valley convention this weekend. Let me know what ya think of them… or any of the silliness I post up here for that matter. It’s always nice to get some feedback. Let’s me know if things are interesting to anyone but me. hahaha

If I get the time I plan to post some other recent tattoo photos. I have a ton of drawing to do for this week though, so it may get put off another day or two.

I hope this finds you all well, and maybe ill see you up at the convention!
Scott

This is the machine Safwan made for me. I use it damn near every tattoo I do! 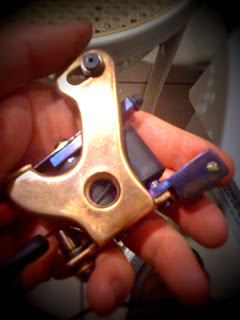 This was the start of the inkwash. Stained paper with tea and peat ink. Black is Talens. 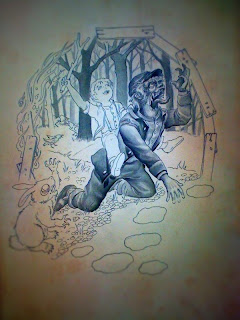 Here is the finished product! I went in to establish a little more depth with acrylic outlines. 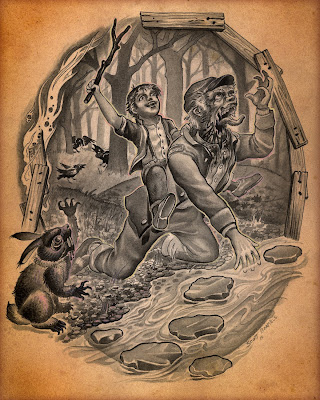 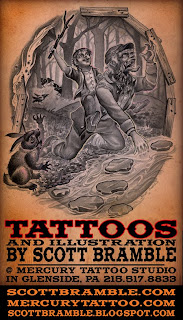 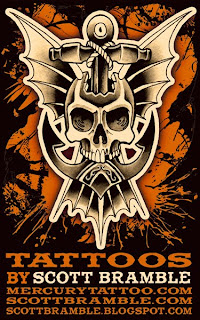